Cartoons can be brutal in their portrayals yet nowhere near as brutal as the facts.

Who’s starving?
Who’s well-fed and determined to stay that way, whatever the price?
Who deserves to starve?
Who’s working to stop the inequities?

From Reuters: Biofuels major driver of food price rise: World Bank “Large increases in biofuels production in the United States and Europe are the main reason behind the steep rise in global food prices, a top World Bank economist said in research published on Monday.”

From OneWorld.Net: Trade Negotiations Cannot Solve Food Crisis Created by WTO and World Bank “Trade negotiators are using the current food crisis as a Trojan Horse at the WTO negotiations to push an agribusiness agenda on farmers and rural communities around the world,” stated Food & Water Watch Executive Director Wenonah Hauter. “Agriculture should be removed from WTO negotiations until international leaders fully examine the impact on developing countries’ ability to feed themselves.”

Hmmm…
The World Bank states one of the major problems then persists in striving toward a non-solution.

Why are people so subjugated they can’t raise their own food? Why do the multinationals work so hard to deny human rights?

It took me most of 40 years to get the idea that we are One from my head to my heart. During that time, I committed actions that benefited me and ignored my brothers and sisters in our global family.

My head said I deserved what I could grab. I’d suffered and needed those material things to comfort me . . .

Now my heart aches with bleeding feelings that stun my sensibilities. The world’s in the clutches of the temporally powerful. Temporal because the Spirit of humanity will survive and the materialistic “rulers” will turn to dust and be forgotten.

This post and its implications are so grief-ridden I’m reduced to a state of utter hope—hope that my grandchild’s children will see better days.

What’s your estimate of when things will turn from greed to compassion?

“Good God! Is it possible that, seeing one of his fellow-creatures starving, destitute of everything, a man can rest and live comfortably in his luxurious mansion? He who meets another in the greatest misery, can he enjoy his fortune? That is why, in the Religion of God, it is prescribed and established that wealthy men each year give over a certain part of their fortune for the maintenance of the poor and unfortunate. That is the foundation of the Religion of God and is binding upon all.
“And as man in this way is not forced nor obliged by the government, but is by the natural tendency of his good heart voluntarily and radiantly showing benevolence toward the poor, such a deed is much praised, approved and pleasing.
“Such is the meaning of the good works in the Divine Books and Tablets.”
‘Abdu’l-Bahá, Some Answered Questions, p. 276

“Unfortunately, the arbiters of human affairs have, instead of embracing the concept of the oneness of mankind and promoting the increase of concord among different peoples, tended to deify the State, to subordinate the rest of mankind to one nation, race or class, to attempt to suppress all discussion and interchange of ideas, or callously to abandon starving millions to the operations of a market system that all too clearly is aggravating the plight of the majority of mankind, while enabling small sections to live in an unprecedented condition of affluence.”
Bahá’í International Community, 1989 Feb 09, Right to Development

Quite often, the global drama strikes me as a group of children fighting over who gets to go first. Actually, I’ve been feeling a bit adolescent lately so it’s not much of a stretch to see the world’s leaders as misbehaving children.

From the New York Times: After 7 Years, Talks Collapse on World Trade

From the New York Times/World Business: China’s Shift on Food Was Key to Trade Impasse

From Reuters: EU points at U.S. for WTO collapse

From The WIP: How to Solve the Food Crisis: Cut trade barriers and start a Green Revolution in Africa, says Jeffrey Sachs
“The only silver lining in this (crisis) is – I even hate the idea of using that – is that it has made more people aware of the things that can be done, like the green revolution. I am not a believer in waiting for crises to get things done. I think it’s an absolutely ridiculous part of our character, but when we do have the crisis, at least it’s true that there is more discussion about agriculture the last months than there was in eight years!”

Hundreds of people, seemingly knowledgable in their field, sit down over a seven-year period and can’t come to an agreement; even though people are starving, and banks are tottering, and simple, sincere people (the world over) are losing hope . . .

One thing that needs to be adjusted in the equation is to strike out the terms referring to Third World. Far as I can figure out, we have one world.

Next, terms need to be incorporated so the job of production becomes integrated globally—not the “us”/”them” situation we have. This will free enormous creative resources for solving our other crises.

“Economic development strategies employed by the United Nations, the World Bank and a number of governments during the last fifty years, however sincerely conceived and executed, have fallen far short of aspirations. In much of the world, the gap between the “haves” and “have-nots” has widened and is accelerating with the persistent disparity in income levels. Social problems have not subsided. In fact, crime and disease are not just on the rise; they are also becoming endemic and more difficult to combat.

“These failures can be traced to a number of factors. They include a misplaced focus on large-scale projects and bureaucratic over-centralization, unjust terms of international trade, a pervasive corruption that has been allowed to flourish throughout the system, the exclusion of women from the decision-making processes at all levels, a general inability to ensure that resources reach the poor, and the diversion of development resources into military hardware.

“A dispassionate examination of these factors betrays a common systematic and fundamental flaw in the current paradigm for economic development: material needs are often addressed without taking into account the spiritual factors and their motivating power….

“Because of the spiritually damaging nature of dependency, schemes which focus solely on redistributing material wealth are doomed to failure in the long run. Distribution of wealth must be approached in an efficient and equitable manner. In fact, it must be intimately integrated with the process of wealth creation.”
Bahá’í International Community, 1995 Oct, Turning Point For All Nations 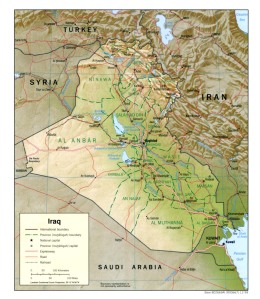 I’ve received permission from Esra’a Al Shafei to reprint an article she wrote on Mideast Youth – Thinking Ahead. Here’s a bit of bio about her:

“A 21 year old student from a Kingdom the size of a bathtub in the Gulf: Bahrain. She comes from a long line of lift engineers and personnel managers. She likes hardcore acoustic noise-terror music and people who can take a joke. She thinks college ultimately does not matter in the slightest, but unfortunately, some kind of socio-political imposition of cultural norms forces her to attend. She enjoys drinking flavored milk and writing about herself in 3rd person to remind herself of her existence.”

And, here’s her article, Iraqi Youth Use Music To Deal With Chaos:

Iraqi youth use music to deal with chaos

I’ve always wondered how Iraqi youth must feel now that at least 5 years have passed since the war started, with their situation only getting direr. Religious extremism there is worse than I expected, or at least that’s how the media right now is making it seem. Lately an article from Baghdad by Reuters explores how some youth deal with the war around them; through their passion for music. I found the article very inspiring and touching, especially since it deals with something that all of us take for granted but probably all love and can’t live without: Music. Something Iraqi youth are currently risking their lives being involved in.

“When I play my oud, I defy violence in society,” said Haneen Imad, 17, referring to her traditional Arabic lute, as she played an old folk song on its strings. “When I hear the sound of a helicopter droning over my head, I play louder.”

Farand Nashaat, 14, hides his trumpet in a rucksack on the way to school so as not to draw attention to his love of music.

Zuhel Sultan, a 16-year-old pianist, joined the music school when she was 10. Gunmen killed her father four years ago and her mother died of a stroke shortly after, but she says she’s lucky.

“I’m lucky because I have music. With music, I can overcome my difficulties — the dangers of roads, explosions, fearing for relatives,” she said with a broad smile.

Despite hardships, the school provides all instruments, ballet costumes and musical scores — and offers a cherished escape from daily life for pupils like Husam al-Deen, a 17-year-old cellist.

“My most joyful time is at school,” he said. “It’s a beautiful feeling — we forget the problems on the street, the war, the Americans. We forget everything until we go home.”

I bet after reading this article, you too might feel lucky that something you love so much (if you love music, and I can’t imagine anyone who doesn’t) comes so easy in your life while others have to risk their lives just to play it.

For the heavy metal fans out there, there’s a prominent band called Acrassicauda in Baghdad who are seeking official refugee status as what they do is extremely risky as well:

Original members Firas (bass), Tony (lead guitar), Marwan (drums), Faisal (rhythm guitar) and Waleed (lead vocals) were only able to play 3 shows before the war started in 2003. Soon after, Waleed retired from the band and fled the country, leaving Faisal to fill the void of lead singer. Due to increased security precautions throughout Iraq, it became difficult to practice or even get through a show without serious problems. As the situation worsened in Baghdad they began receiving death threats from insurgent groups and religious fundamentalists accusing them of Satan-worship. Eventually, it proved impossible to find any venue that was safe to perform in.

You can read more about them at their blog here. You can see how much they have to deal with just so they can practice and play their music. It’s an increasingly depressing situation for musicians and music lovers in Iraq.