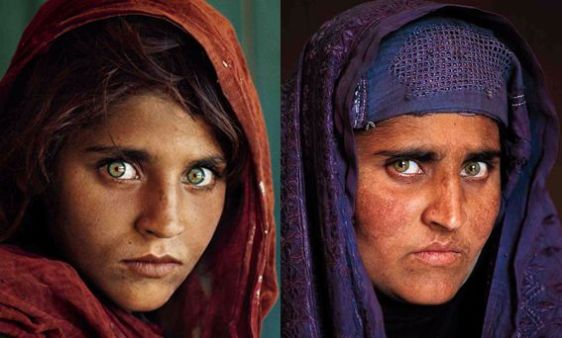 Both images (the same person) are from National Geographic. The one on the left taken in 1984, the right in 2002, in Afghanistan.

The woman was interviewed in 2002. Here’s an excerpt:

Had she ever felt safe?

“No. But life under the Taliban was better. At least there was peace and order.”

Had she ever seen the photograph of herself as a girl?

She can write her name, but cannot read. She harbors the hope of education for her children. “I want my daughters to have skills,” she said. “I wanted to finish school but could not. I was sorry when I had to leave.”

Education, it is said, is the light in the eye. There is no such light for her. It is possibly too late for her 13-year-old daughter as well, Sharbat Gula said. The two younger daughters still have a chance.

This is a story repeated far too often in our world but there is strong reason for hope!

One among many reasons for hope is a site called The Girl Effect and I can’t urge you strongly enough to click that link and at least watch the really awesome video !

Here is a PDF file of their Fact Sheet and here’s an excerpt from that Fact Sheet:

• When a girl in the developing world receives seven or more years of education, she marries four years later and has 2.2 fewer children.

• Research in developing countries has shown a consistent relationship between better infant and child health and higher levels of schooling among mothers.

• When women and girls earn income, they reinvest 90 percent of it into their families, as compared to only 30 to 40 percent for a man.

Here are two videos from their site:

“The world of humanity has two wings — one is women and the other men. Not until both wings are equally developed can the bird fly. Should one wing remain weak, flight is impossible. Not until the world of women becomes equal to the world of men in the acquisition of virtues and perfections, can success and prosperity be attained as they ought to be.”

As long as women are prevented from attaining their highest possibilities, so long will men be unable to achieve the greatness which might be theirs.